Appetite for the Impossible Part 1: Roots of Greatness

This year, June marked a very unique confluence of two seemingly unrelated, yet pivotal, holiday commemorations: Juneteenth and the 100th anniversary of the Greenwood race massacre in Tulsa, Oklahoma. Both are important milestones of the evolution of Black America; but when explored at a deeper level, these two past events provide a window into a potential pathway to the equitable economy that has remained, to this day, an unfulfilled reality. Before we seek to build a stronger Black economy in America, it is crucial that we all take time to review where we’ve been to understand our shared economic legacy.

A Closer Look at Juneteenth and the Legacy of Jim Crow

On June 16, 2021, the U.S. Congress passed legislation to make Juneteenth (June 19) a federal holiday.  The signing of this legislation is a nod that speaks to the Biden/Harris administration’s commitment to address the racial tensions that festered throughout the previous administration and American history. But rather than celebrate, we should all take a closer look at the history and legacy that this holiday represents: one of lies, intentional suppression of Black Freedom, and a rewriting of history to suit those in power. 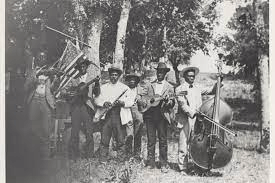 Juneteenth's commemoration is on the anniversary date of the June 19, 1865 announcement by the Union Army proclaiming and enforcing freedom of enslaved people in Texas, the last state of the Confederacy with institutional slavery. When you peel back the layers of the true roots of this holiday, rather than a federal day to reaffirm and celebrate the freedom of Black people, it simply underscores the national government’s inability and failure at the time to enforce its own decree.

President Abraham Lincoln's Emancipation Proclamation of 1862 had officially outlawed slavery in Texas and in all of the other states of the original Confederacy. However, slave owners in Texas and many other not Southern then-border states such as Delaware and Kentucky showed no signs of, or desire to, voluntarily end the practice of slavery. Ending slavery would have been to their economic detriment. The outcome: thousands of free Black Americans continued to be held as the property of other Americans; they continued to be sold, shackled, beaten, whipped, raped, and made to endure treatment far worse than that of chattel - all because the knowledge of their legal free status was withheld from them.

Juneteeth became a day that these freed, former-slaves in Texas would commemorate their eventual legal release from slavery. This new federal holiday now stands as a reminder of America’s ongoing pattern of rewriting history in support of maintaining a true land of freedom, liberty, and justice for all. The reality is that Black Americans, along with other indigenous and immigrant residents of this country, still have neither of those in equal measure.

This is not by accident. One of the outgrowths of systemic slavery was that ‘freedmen’ had developed generational skill and expertise in the trades and future businesses that kept plantations financially viable and that would drive the Southern economy: farming, construction, engineering, metalsmithing, and manufacturing. During slavery, they had also developed skills in personal and professional services that they provided to their captors and to one another, out of either force or necessity (culinary arts, cleaning, hospitality, childcare, etc.) Not only did Southern whites take a heavy economic blow of having to now pay for the labor, they knew that former slaves also left with the knowledge and expertise to develop their own thriving value chain and economies. What happened to Black America from that point forward was driven, not by fear of physical retaliation from former slaves, but out of white fear of the potential of Black economic mobility.

The Rise and Destruction of New Black Economies Post-Slavery

Just as slavery was an intentional and well-structured economic system that leveraged free labor for wealth creation, its abolishment gave way to similar systems that perpetuated ongoing disenfranchisement, with some practices even signed into law. Legal emancipation led to many local and state laws being passed to limit the ability of Blacks to own property, to be educated, and to participate in the political process. These ‘Jim Crow’ laws were intended to protect white power and to put guardrails on the economic mobility of Black Americans and their existing and future offspring. These conditions forced many Blacks to migrate to the north or to join the western land rush in order to escape these limits and to find true liberty and chance at self-determination.

Previously free Blacks joined freed slaves and their descendants and created thriving African American business communities out West and in the Mid-Atlantic. A few of these communities rose highly enough in size and impact that they became known as the "Black Wall Streets of America." One of these cities, Tulsa, had one of the most prominent concentrations of Black businesses in the United States during the early 20th century. The success of Black-owned businesses there led Booker T. Washington to visit in 1905 and encourage residents to continue to build and cooperate among themselves, securing their ownership and independence. By 1921, the Greenwood community in Tulsa was home to about 10,000 Black residents and a thriving Black commercial district with thriving businesses, including grocery stores, banks, libraries, and much more. 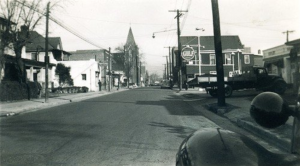 Similar communities sprung up across the country, with at least two others gaining national prominence and emerging as beacons for the migration of freedmen and recently emancipated slaves. In the late 19th and early 20th centuries, when disenfranchising Blacks and openly violating their rights was still common, the Black population of the Hayti community of Durham, North Carolina were making strides in business and financial services that challenged the legitimacy of white supremacy. Richmond, Virginia’s Jackson Ward emerged as a center for both Black commerce and entertainment earning the moniker, "Harlem of the South." In Tulsa, Durham, Richmond, and other communities, both Black leaders and white allies and investors alike played a critical part in the economic development of these districts.

Booker T. Washington championed the emergence of these communities, positing in his 1895 ‘Atlanta Address’, that Blacks must concentrate on educating themselves, learning useful trades, launching and investing in their own businesses. Founding the National Negro Business League, Washington believed that entrepreneurship, education, economic progress, and merit would prove the value of Black participation in the American economy. This approach was in seeming contrast and opposition to (at the time) another prominent leader in the fight to achieve equality in a post-Civil War economy. W.E.B Dubois put forward a strategy that focused on directly challenging Jim Crow segregation and the disenfranchisement of black voters in the South through political activism. These strategies would come to be adopted and championed by the emergent National Association for the Advancement of Colored People (NAACP).

Dubois’ Niagara Movement (1905–10) called for full political, civil, and social rights for Blacks. This stance stood in notable contrast to what he perceived was a weak accommodationist approach by Washington, labeling it as the ‘Atlanta Compromise’. DuBois’ stance was emboldened by concerted and continuing efforts (both renegade and legally sanctioned) to disrupt the business and economic success of emerging Black communities and business districts including systemic lynchings. One of the most horrific and devastating examples was the well-documented Greenwood race massacre and burning, which cost hundreds of lives, and destroyed thousands of homes and businesses. As a result of growing violence, former Washington supporters gradually shifted their support to civil rights activism, until the Civil Rights Movement commenced in the 1950s. This shift from a focus on entrepreneurial and economic independence to one of civil rights would forever change the trajectory of the Black experience in America.

Of course, full and equal civil rights is exactly what is needed for all Americans, and most especially those who were enslaved. That righteous fight has gradually improved the lives of Black Americans. Many Black leaders and allies were martyred for the rights we can enjoy today including our rights to vote, to receive public education, and to participate in open commerce and consumer activities. That said, we know - and recent growing awareness is calling new attention to the fact - that these rights have been anything but equal. While the Civil Rights Movement played a vital part in advancing progress for Blacks in America, W.E.B. DuBois and his early advocates failed to understand the extent and methods of white leadership’s long-term efforts to maintain power and economic position.

By choosing civil rights before economic rebuilding, Black Americans’ entrepreneurial and commercial potential was stunted and has remained so to this day. Ironically, the desegregation that many Civil Rights leaders gave their lives to advocate for encouraged Black citizens to live and shop in places beyond Black neighborhoods in the city. Thriving Black business districts declined, and the decimation of what few of these districts remained by urban renewal and the construction of highways that often cut right through these communities - effectively cutting off the promise of Black Wall Streets across the country.

So, was Dubois’s theory flawed? Would Washington’s strategy, if it had emerged as the stronger choice, left Black Americans better off? In reality, both men were right. It was not an ‘either/or’ choice; both strategies were and continue to be necessary. Every Black American should have equal civil rights. Every Black American should also have an equitable opportunity to develop and grow a business that provides leads to the economic thriving of themselves, their family, and their community. W.E.B. DuBois and his early advocates severely underestimated the disturbing extent to which white-dominant power structures would fight for their own survival. Here we are a full century later and Black Americans still have a literal and figurative knee on our necks, with both persistent and newly emboldened threats to our economic opportunity, our votes, our safety, and even our very lives.

Where We Are Today and What Black Wall St. Could Look Like Tomorrow 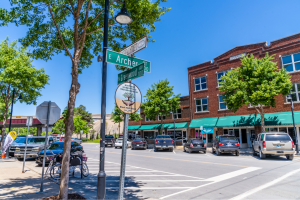 We certainly can’t go back and rewrite history. However, we can (and should) gain perspective from our history in order to chart a path forward to greater economic equity for Black entrepreneurs and businesses in our country. We do not expect this will take generations to do. Historical Black Wall Streets and their leaders were able to develop and build thriving Black business districts in a few short decades through intentional and documented efforts to lay a groundwork for economic agency and self-determination.

I know that my enslaved ancestors held a deep belief that someday, their descendants would be able to taste a freedom that they could only dream of. They could envision a sweet liberty that they had not ever tasted for themselves. The residents of Greenwood, Hayti, and Jackson Ward had that same appetite for the seemingly impossible. Over a century later, we now stand at a pivotal crossroads where we have the opportunity to write a new narrative.

Forward Cities’ ultimate vision is and will continue to be equity for every entrepreneur in America. Since stepping into the role of President & CEO of this organization, I have advocated for our organization to take a bold new step in being more explicit about our commitment to helping communities develop Black-centric ecosystems. Towards that end, Forward Cities is excited to announce that alongside our broader equity mission we will also be proudly prioritizing support, learning opportunities, and content focused on helping communities and their leaders understand the legacy of Black Wall Street in our nation and to re-imagine what Black Wall Street can look like in communities today and into the future. Everything is possible!

Be on the lookout for more in our “Appetite for the Impossible” blog series. Coming up in Part 2 we explore how we can tap into core practices that historical Black Wall Street leaders used to build new Black-centric ecosystems in a post-pandemic economy.

ABIDE: Driving Forward to Equity for Every Entrepreneur

This blog contains personal reflections from Fay Horwitt, President of….

After centuries of racial violence, displacement, segregation and a lack….