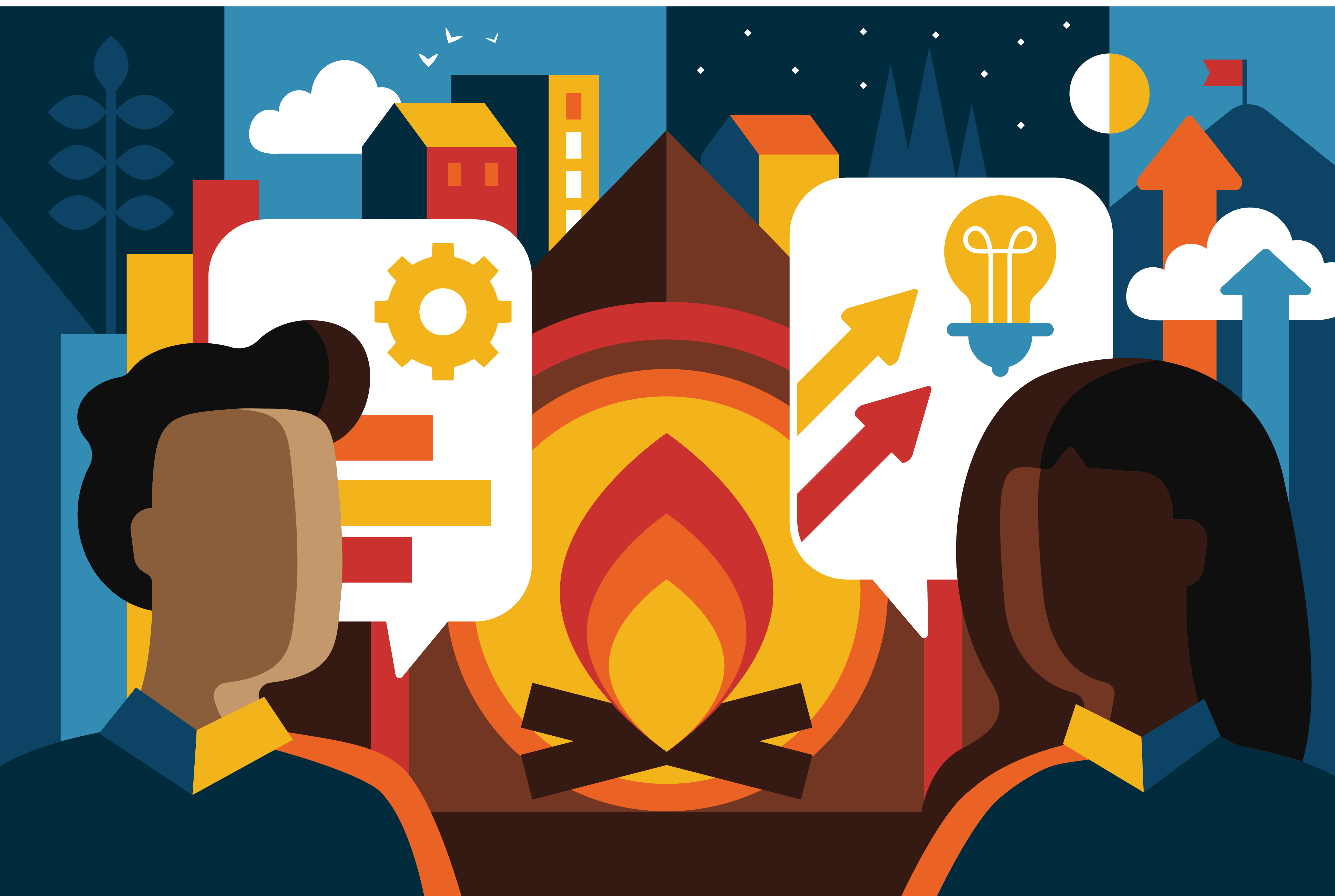 Forward Cities is launching a new interview series that explores the role of entrepreneurship and equitable entrepreneurial ecosystem building in a bold and progressive economic recovery agenda at the local, state, and national levels.

It spotlights critical contributions from experts steeped in the economic development practice, research, or policy realm and invites the authors to a virtual conversation that further teases out some of the ideas.

In the conversation, Pete and Nicolas discuss lessons the research on past economic recovery efforts hold on the mechanisms to promote job growth and economic inclusion. They speak about the pivotal role that civic leaders play in working across boundaries, unpack what Pete calls a “bi-focal approach” that prioritizes both the short- and long-term priorities, and highlight how nurturing entrepreneurship in underserved communities meets both objectives.

Nicolas Gunkel: What prompted you to study evidence-based guidance available to civic leaders to focus their economic recovery efforts on promoting job growth and economic inclusion?

Pete Carlson: I was inspired by discussions within the Brookings Network on Economic Inclusion that I belong to, which is focused on implementing more inclusive approaches to economic development and actively engaging the business community in those efforts. Several members had been asking, “given the 1,001 things we could be doing with our limited time and resources, how do we figure out where to focus our efforts?”

It struck me that those decisions need to be guided by science rather than anecdotes, fads, or conventional wisdom, which has too often been the case in economic development. So, I decided to review the relevant academic research that’s been published over the past decade to see what useful guidance it might offer to folks on the front line of economic recovery efforts.

Why did you focus mainly on the business development literature, knowing that economic recovery requires a multifaceted approach?

I agree that economic recovery involves more than business development, such as helping residents of low-income communities prepare for and gain access to good jobs. However, creating good jobs (on which everything else depends) remains the weakest link. Currently, a huge amount of the resources that go into economic development are wasted on activities that do little to promote the long-term growth of good jobs, and in some cases actually make conditions worse for low-income residents. So taking a deep dive into how to more effectively create good jobs seemed like a good place to start.

You headlined your piece "Where should civic leaders focus their economic recovery efforts?" Why did you focus on civic leaders, as distinct from business or government leaders, as the intended audience?

My focus on civic leaders was also inspired by the Brookings network. When we first launched the network several years ago, we went looking for regional leaders who were actively linking economic inclusion and economic development. We found that the individuals leading those efforts were working from a number of different platforms in their communities, not just economic development organizations or business or government, but also metropolitan planning organizations and foundation collaboratives.

We found that those leaders had a number of distinctive characteristics. They were well-respected in their communities as honest brokers, experienced in working across program boundaries, able to hold onto the big picture while focusing on individual pieces, comfortable with uncertainty and risk, and able to seize opportunities as they arise. In addition, they had the long-term best interests of their communities at heart and were in it for the long haul.

To succeed, economic recovery efforts will require a core group of that kind of civic leader to function as “regional organizers,” putting the pieces together and holding them together long enough to make a lasting difference.

“Regional organizers” as intentionally distinct from city or community-level organizers?

That’s not a value judgment, it’s simply a reflection of where my work has been focused for the past decade. Back in 2010, several colleagues and I conducted a study of what different regions around the country were doing to get their economies growing again, and what they were doing to expand opportunity as part of that process.

We found that proponents of economic growth and proponents of expanding opportunity tend to reside in different camps and speak different languages, with a strict division of labor between the business and economic development organizations that focus mainly on economic growth (increasingly at the regional level) and the philanthropic, labor, religious, advocacy and community-based organizations that focus mainly on expanding opportunity (almost exclusively at the local level). I decided I was best suited to work with the economic growth camp.

So, bottom line, we need organizers at all levels. But even more importantly, we need a healthy interplay among them.

I would like to probe your finding that most “quick jobs” come from new businesses that often don’t survive, while most “good jobs” are generated by businesses that sustain their growth over many years. How is that playing out in the pandemic?

Things are already much worse this time around. In just two months, from February to April of this year, 22 percent of businesses closed (a record number), compared to 5 percent during the entirety of the Great Recession.

Given the number of businesses that have been lost, there will be a natural desire to replace as many of them as possible, as quickly as possible, to get the economy back on track. However, it would be a mistake for civic leaders to put all of their eggs in that basket.

The studies I looked at suggest that civic leaders also need to focus on sustained-growth businesses which exhibit incremental, but ongoing growth rather than episodic bursts of expansion. Sustained-growth businesses are responsible for the biggest cumulative job gains over time. Those businesses offer other benefits as well. Because their growth is sustained, they are able to offer employees stability, security, longevity, and opportunities for advancement, as well as sustained income growth. In other words, high levels of job quality.

The studies I looked at found that during the Great Recession, sustained-growth businesses fared much better than new businesses, which is another good reason to pay more attention to them this time around.

It’s not an either-or choice. Civic leaders will need to replace businesses that have been lost to meet short-term needs, and they will need to support sustained-growth businesses to meet their long-term needs. That will require a “bi-focal” rather than a binary approach.

I like the idea of a bi-focal approach. Thinking of the recent CPS microdata analysis by USC Santa Cruz’ Rob Fairlie that got a lot of media attention for quantifying the disproportionate impact that businesses owned by people of color have experienced as a group, it seems abundantly clear that entire communities need to structurally re-evaluate why they are not successfully nurturing and promoting aspiring and current business owners of color at scale. It seems to me that short-term and long-term objectives are well aligned in this case. Any reactions?

I couldn’t agree more.  This moment seems pregnant with possibilities for change in that direction.

Analyses like the one you cite by Rob Fairlie that call out the disproportionate effects that the pandemic is having on communities of color, along with the protests in the street, are heightening awareness of systemic racism. Members of the Brookings network I belong to report that the conversations in their communities are shifting from “whether” to focus on racial disparities to “how” to address them most effectively.

That’s going to require a lot more than running isolated programs to boost minority entrepreneurship or to support minority-owned businesses as an add-on to business as usual for chambers and economic development organizations. Closing the racial wealth gap will require much more systemic, long-term, and large-scale approaches. However, in the short term, programs to expand minority entrepreneurship can unleash untapped economic potential, create more role models and mentors to inspire and guide others, and normalize entrepreneurship as a viable option in communities of color, which can increase the likelihood of more successful minority businesses down the road.

Both short-term and long-term actions are necessary, and as you point out, their objectives are well aligned.

To what extent would your reading of the literature change if the current recession goes much deeper or longer than expected?

However, on the surface, there are certainly a lot of disruptive forces at work. The latest projection from the Congressional Budget Office estimates that the pandemic could cost the US economy around $8 trillion in real GDP over the next decade. That’s going to leave a lot less wealth to support local economies. In addition, the pandemic is radically altering consumer habits and preferences. Given that the virus has now gotten out of control, the economic damage is likely to be much more extensive and long-lasting, and the post-pandemic landscape is likely to look very different from what it looked like just a few months ago.

One of the disruptive forces I’m most worried about is the wave of consolidations, takeovers and buy-outs that are likely to happen over the next months, which will restructure the economy in ways that make it even harder for small businesses to survive and thrive. On top of that, large corporations are receiving concierge treatment when accessing recovery dollars, while young and small businesses are stranded in line. What are your thoughts on that?

Although the trend you’re describing was outside the scope of my study, I share your concern. From a job creation standpoint, a wave of consolidations would certainly be counterproductive. Mergers and acquisitions typically lead to reductions in employment, and often reductions in earnings, which is the opposite of what’s needed right now.

On top of that, unlike past recessions, corporations are continuing to borrow at record levels, double the pace of last year through June of this year.  Those levels of debt are clearly not sustainable.

If policymakers at the federal level don’t act, local economic recovery efforts are going to be facing stiff headwinds.

I think it’s going to be radically different. The good news is that the pandemic is likely to accelerate the shift away from an over-reliance on financial incentives to get businesses to relocate, so those resources can be put to better use. Momentum has been building in that direction since the Great Recession.

The pandemic also calls into question the use of stadiums and convention centers as effective tools to revitalize downtown areas. And it raises questions about what to do with surplus office space and shopping malls, due to increased working from home and shopping online.

In addition, supply chains that have been disrupted will need to be rebuilt, which creates opportunities for small businesses located in or near low-income communities to break into those supply chains or fill existing gaps in the supply base of regional anchor institutions.

And heightened awareness of racial disparities and the growing movement to address them will require economic developers to be much more intentional about developing and implementing effective strategies to grow good jobs in ways that expand opportunities for all.

At the same time, economic developers are likely to have fewer resources to work with. Funding for local economic development organizations fell by 40 percent in the first few years following the Great Recession. Those cuts are likely to be even deeper this time around, since local and state budgets have been hit even harder by higher costs and lower tax revenue during the pandemic.

As the smoke clears from the pandemic, civic leaders will need to carefully survey the new landscape to figure out where their scarce resources can make the biggest difference. They’re likely to find that those leverage points are very different from what they assumed just a few months ago.

If you would like to suggest a future guest to the interview/conversation series, please don’t hesitate to reach out here using the subject line “Forward Cities Reimagining Recovery Series”.

Entrepreneurial support organizations are integral to ecosystems across the country.….

"Regardless of motivation, there are clear benefits to Anchor Institutions….